The first exhibition of the great Japanese artist,Takashi Murakami, in an exhibition space fo the Italian public. Through a selection of recent works, including three imponenti Arhat, the exhibition at the Palazzo Reale  aims to highlight the ability of Murakami to merge historical references, contemporary and science fiction in a multitude of styles, methods, forms and techniques have become over time a kind of stylistic trademark of a the most celebrated artist of our time.

Takashi Murakami, the great artist appreciated throughout the world for its ability to bring together in his works and traditional Japanese pop culture, manga and Buddhist iconography, arrives in Milan with an exhibition in the Hall of the Caryatids.

Nell’exposure emerges strongly the author’s ability to blend historical references, contemporary and science fiction in a multitude of styles, methods, forms and techniques that have become over time a kind of trademark style.

At the entrance of the exhibition, visitors are greeted by the silvery reflections of light sculpture ‘Oval Buddha Silver’ (2008). The exhibition continues with the presentation of three ‘Arhat’ large size, between 5 and 10 meters in length, designed in response to the recent major earthquake in Japan in 2011. The term ‘Arhat’ is derived from Sanskrit and means’ to be attained enlightenment ‘. The source of the images depicted in these paintings is an old tale that tells the story of the Buddhist monks who face the decline and death, in which demonic monsters and decrepit monks in traditional robes and vestments wander along psychedelic landscapes.

The exhibition, curated by Francesco Bonami, it also presents a selection of self-portraits of the artist, who playfully represent the continuous research that Murakami conducted on self-image and perception of the ever-changing place in the universe. Finally, a third series of paintings depicts a constellation of skulls that – almost like a waterfall – overlap with one another, merging together: psychedelic colors and shapes are placed so in contrast to the final aspect of the subject macabre .

THE HIDDEN PLACES OF MILANO

Pubblicato 20 dicembre 2013 | Da admin
VILLA ATELLANI AND THE ENCHANTED GARDEN OF LEONARDO
In the period between the end of the Fourteenth and the beginning of the Fifteenth centuries, Villa Atellani would be the meeting point for Renaissance artists, writers and musicians. We can still feel their presence in the rooms and the evocative garden, all overlooked by Lodovico il Moro, the Duke of Milan.


Whenever Leonardo Da Vinci stayed in Milan he would usually go to this house in order to find a few moments of relaxation and walk around its large Renaissance garden, rich in statues and a water fountain, while he was completing his work on the Last supper. Beautiful rooms and frescoes of Villa Atellani; wonderful gardens which still preserve Leonardo’s vineyard. 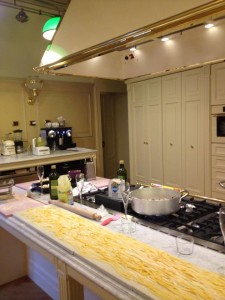